“Only a democracy could have thought that land could have been set aside, not for the rich and nobility, but for everybody for all time”

The intersection of Diversey and Pulaski near Avondale’s southwest border today has the distinction of being fronted by parking lots on all four corners. The sprawling industrial complex on the northwest corner, while in good condition, has stood vacant since Macy’s warehouse departed several years back. But, for over four decades in the middle of the 20th century, the view from the top floors of the now vacant industrial complex formerly housing the Olson Rug Company might have appeared like a “giant rug which could give inspiration to artists and weavers,” according to a 1953 Chicago Daily Tribune article.

Walter E. Olson, who designed Olson Park with his wife Ida, was a bit of a weaver himself, driving across Wisconsin and Illinois to select types of rocks, birch trees, and stumps in order to assemble his vision. Olson, much like Teddy Roosevelt and Frederic Law Olmsted, believed that everyone deserved access to nature. Understanding that “most of his employees could not afford a summer home like his [40 acre estate in Eagle River, Wisconsin], he sought to “bring the outdoors to his workers.” The park, which initially covered 10 acres along Pulaski, ultimately stretched out over 22 acres surrounding the rug factory and featured a rock garden, picnic area, bird sanctuary, duck pond, spruces and pines, flowers, ravines and caves, paths of birch railings, bridges, and most notably- three waterfalls, one reaching 35 feet in height.

During the height of the Great Depression in 1935, sales were slow at Olson Rug. So, Olson put some 200 of his employees to work for over six months to recreate a slice of rural Wisconsin along industrial Pulaski, using debris from the 1871 Chicago fire amongst other materials. By the time they were done, Avondale had essentially another public park- operating independently from the park district, but eventually open free to the public from 8 AM to midnight. While this became the setting of tranquil lunch breaks for his staff, the park attracted hundreds of thousands of visitors per year.

The park officially opened on September 27, 1935, what was then American Indian Day in Illinois (fourth Saturday of September) as well as the 100th anniversary of a treaty resulted in the final expulsion of the Pottawatomies, Chippewas, and Ottawas across the Mississippi. The three waterfalls in the park represented each of these tribes, which all had members in attendance. The park itself was “figuratively” deeded back to the Indians.

Throughout the decades, regular events at the park included tribal songs and rituals by Chief Thundercloud of the Ottawas, archery demonstrations from atop the waterfall, a Green Corn Festival (in 1950) when the Great Spirit provided blessings for a bountiful harvest, a recreation (in 1958) of John T. McCutcheon’s famous Injun Summer painting using mannequins, and an extravagant Christmas display featuring lights, candy canes, reindeer, and Santa sledding along the length of a hanging wire. Though it may have seemed as much theme park as nature park, the fact remains that Olson Park was always free to the public.

Olson’s achievements proved time and again that giving back to the community is good business practice. While creating a tourist attraction in the area helped raise local property values, Olson proved newsworthy for numerous charitable acts. In 1933, he enabled his employees to become Good Fellows to a hundred needy families and matched their contributions dollar for dollar. During World War II, customers could send in old wool rugs, rags, and clothes which the rug company would turn into a carpet sold at half price. Well after the war, he launched an art scholarship, and even today his memorial foundation supports a public library in rural Wisconsin.

Olson Rug Company continued to succeed well beyond World War II, expanding its Avondale plant twice in the 1950s through employee investments. In 1962, however, the business was sold to Stephon-Leedom Carpet Company, and in 1965 the Pulaski plant was sold to Marshall Field. Marshall Field, as promised at the time of sale, initially continued to maintain the park. By the late 1970s, though, they presumably needed to replace a nearby parking lot surrendered to the city to make way for a firehouse. More than three decades later, I may be one of very few tourists to visit the parking lot formerly known as Olson Park, but memories of this park still endure today.

Though Avondale typically has been known as a working class neighborhood, the presence of Virgil M. Brand in the area a century ago marks a bold exception. Though Brand lived in a humble bachelor’s pad atop his (recently demolished) brewery on the west side of Elston Avenue in neighboring Logan Square, he turned a property on the east side of Elston in Avondale into an extravagant picnic grove- featuring a beer garden, bowling alley, hobby horses, dancing pavilion, shooting gallery, photo booths, merry-go-round, a ‘fruit column’ (likely a tribute to the famous fruit column of Stuttgart, Germany)1, and a restaurant tent. I haven’t the foggiest idea what a ‘Plattdeutsches Buern-Krog’ (shown in the northern map) might be, but his pockets were deep enough to build one that was almost 3,200 square feet!

Virgil Brand wasn’t entirely a self-made man- his father, Michael Brand, had been an original partner in the business that eventually became the Anheuser-Busch brewery. However, he worked as a bookkeeper at his father’s brewery, and by 1899, after his father’s death, he started a brewery of his own with two brothers and a cousin.

Interestingly, Brand’s enduring legacy seems more tied to his famous coin collection than anything else. At one time holding the title of President of the Chicago Numismatic Society and acquiring a collection reaching over 350,000 coins worth an estimated $2 million by the 1920s, he “entered each and every purchase in a journal, and his legacy included more than 50 volumes of original and photocopied data detailing the contents of his collection.” According to an article in the Numismatist, for Brand “to desire a coin was to own it if it could be purchased”- presumably thanks to his massive fortune as a beer baron.

The ultimate decline of Chicago brewing is typically attributed to Prohibition (1919-1933). However, Brand’s untimely death in 1926, reputedly resulting from food poisoning at a restaurant catering to the poor, may have accelerated the downfall of the Avondale paradise that once was the Brands picnic grove. In the 1920s (it’s unclear whether this began before or after Brand’s death), residents of Avondale petitioned the board of the new River Park District to purchase Brand’s site, and by 1927 it was formally acquired. Facilities at the time included basketball and tennis courts, a horseshoe pitching field, and an athletic field converted for ice skating in the winter. By 1934 the park was consolidated into the Chicago Park District.

Little evidence remains of Brand’s old picnic grove, and the original brick structure that served as a fieldhouse (presumably part of the old bowling alley) was demolished in the 1970s to make way for a new, larger fieldhouse which, like disco music, could only have been considered aesthetically pleasing during the 1970s. However, in the northeast corner of the park, three monstrous and ancient black poplar trees still stand, perhaps made strong by the beer-soaked grounds.

1 The fruit column originated at Cannstatter Volksfest, which celebrated a successful harvest in 1817 following years of drought caused by the massive eruption of the Tambora Volcano in Indonesia in 1815. 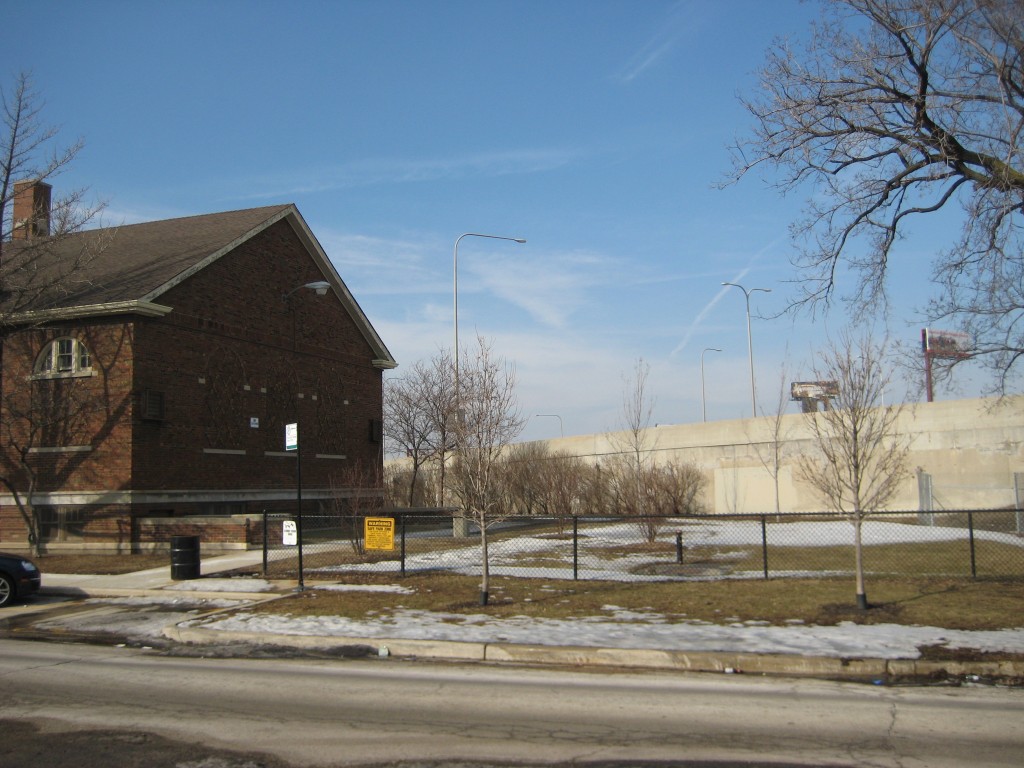