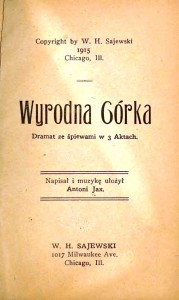 Following is a guest post by Mark Piekarz, a musician who has lived in Avondale for the past several years.

The experiences of immigrants in America through time, despite differences in origin, generations, and regions of the country, have core similarities which are often discussed: feelings of being stuck between identities (and thus belonging nowhere), resistance from older strata of immigrants, economic hardship, and social difficulties.

Among those entering the country of Polish extraction was one Antoni Jax, arriving in 1889 at around age 40, and settling near the Chicago’s Polish Triangle at the intersection of Division, Ashland, and Milwaukee.

It would be wrong to say that Jax came from Poland, since the country did not exist then; it had been cleared off the map of Europe almost a century prior to his emigration, and would continue to be missing for almost three more decades. To be specific, he came from modern-day Gniezno, which at that time was located in the Kingdom of Prussia, one of the states that carved territory from the Poland of old.

After his arrival, details of his personal life are scarce, due to an apparent disregard for fame or any other notoriety. We know that he was an organist at St. John Cantius near Milwaukee and Chicago, and St. Hedwig in Bucktown. He lived for a period at 1954 North Damen Ave (which was called Robey Street at that time). We also know that his last known address was listed in the 1920 Census as 2921 North Allen Avenue in Avondale, between Milwaukee and Kimball.

His body of work survives as a large number of musical stage plays. Written in the Polish language, they tackle a breadth of subject matter that was unheard of in Polish immigrant circles. While about a third of his plays were set in Poland in historical settings, the rest were either set in the U.S., or were set in then-contemporary Poland on themes of emigration.

One of the reasons why Jax’s output is so notable is that the vast majority of Polish-language theater works written in the U.S. pointed back to Poland: describing heroic history, national disasters and aspirations. For a fair number of Polish immigrants, the journey to the U.S. was not necessarily thought of as permanent; members of this mostly educated and more influential class might’ve had the resources to return someday, and often didn’t come to the U.S. for purely economic reasons in the first place. While keeping knowledge about Poland’s past alive, these works almost entirely neglected the reality for most immigrants. For people whose aim was entirely in making life here permanent, and in practicing self-segregation into supportive communities, there were few practical opportunities for adults to learn about American history.

Based on the titles of his musical stage plays, it seems that Jax made a concerted effort to provide insight into then-current events in America and Polish-America. Following is a list of some English-language translations of his titles involving American themes.

Set in Poland, on theme of immigration:

From the little that’s been written about Antoni Jax, tickets for his productions always sold extremely well. And it follows that the librettos for his stage plays were printed in large enough numbers to leave a lasting trace. But if we move forward in years from the last of these productions until his death in 1926 – about ten years – his death registered barely a mention. Only one of the Polish-language dailies active at the time gives notice – and that, a basic ”time and place” treatment.

If Jax had shortcomings – and it has been suggested that his writing was rough compared to the learned (true!) traditions of Polish drama – has there ever been a substantial canon of fine theater produced by any foreign-language communities in the U.S.?

One of his contemporaries, Szczęsny Zahajkiewicz (1861-1917), came to the U.S. in the same year, but eventually received a hero’s farewell at his passing. Although he had been published already before coming to the U.S., this really doesn’t explain the wide discrepancy between these writers’ acceptance in part of what I’ll call the “Polish Writers’ Elite” in Chicago Polonia.

For someone who took to heart specific issues which meant a great deal to immigrants, I don’t think there is an answer yet to why Antoni Jax hasn’t found appreciation.