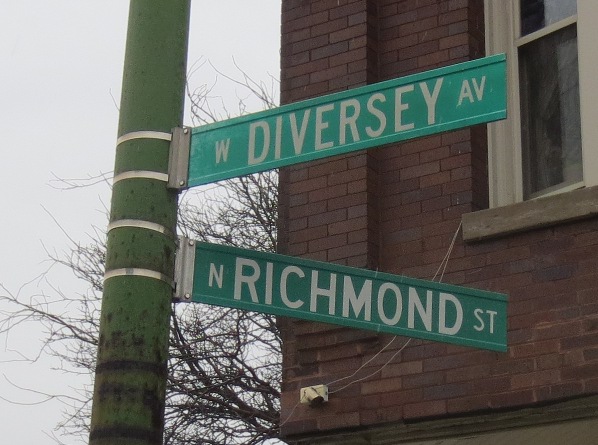 It’s important to learn the origins of the street names in your neighborhood. That way, if you’re trying to give someone directions to a place but can’t remember the name of the street, at least you might remember some tangential trivia that might help jog your memory.

“It’s over on that street… I forget the name. Starts with a D.”

“No, no, not Division. It’s named after some brewer from the 1830s. Cat who took over that brewery down in the loop. The street’s got the same name as the brewery and the brewer.”

“Yeah, Diversey. Michael Diversey. Lill & Diversey Brewery. They say that was a huge building, four stories high with a three story tower. Over at the corner of Michigan and Chicago before it burned down from the Chicago fire.”

“So where’s this laundromat?”

“Laundromat? I thought we were talking about beer?”

You have probably speculated that many street names derive from places in America. For example, the adjacent north-south streets Albany and Troy are named after the respective cities along the Hudson in New York. Avondale and Roscoe derive from small towns in Pennsylvania, and Springfield is in fact named after the capital of Illinois. Likewise, California, Francisco, and Sacramento all relate to the state of California. A couple of streets are named after Indian villages- Milwaukee from the village at the current site of the now great city, and more esoterically, Washtenaw, which was an Indian settlement in Detroit. Other streets named after places include Monticello, after Thomas Jefferson’s Virginia estate, Richmond after Richmond Virginia, Newport after Newport Rhode Island, and Oakdale after a town on Long Island.

A handful of Avondale street names refer specifically to Chicago geography. In the 1850s and 1860s, Western was in fact the western boundary of Chicago. Lawndale was named after the Lawndale neighborhood, and School was named after the Nathaniel Hawthorne School at Clifton and School. Maplewood was an early village predating Logan Square and Avondale, known for an abundance of planted maple trees. Artesian borrows its name from a 1,200-foot deep Artesian well near Chicago and Western Avenues. Somewhat more cryptically, Central Park refers to the former name of Garfield Park, which is the east-west midpoint across the city along Madison.

Only three street names draw inspiration from places outside of the United States. These include Karlov, named after a resort city in Hungary; Christiana, after the former name of Oslo Norway; and Melrose, after the Melrose Abbey in Scotland.

A fair number of streets were named after historic figures of international significance, mostly for prominent roles in past wars. Barry Avenue takes its name from Commodore John Barry, known as the “father of the American Navy.” St. Louis either directly references the city or its namesake, King Louis XIV. Wellington is named after Arthur Wellesley, the first Duke of Wellington, who famously defeated Napoleon at the battle of Waterloo. The twenty year legal battle resulting in the renaming of Crawford Avenue to Pulaski Avenue after American Revolution hero Casimir Pulaski is a long story worth its own blog post.

Three street names directly tie to the Civil War- Belmont Avenue named after the Battle of Belmont; Gresham, named after General (and subsequent U.S. Secretary of State) Walter Q. Gresham; and Kearsarge after the USS Kearsarge, which sank a confederate ship in 1864.

By far the most common inspiration for street names in Chicago is the names of the real estate developers themselves. While most of these people today are mere footnotes in Chicago history, they certainly were influential in their time due to their wealth, land holdings, and sometimes political prowess. These include the following:

Addison Street was named after Dr. Thomas Addison, a British doctor who first described the disease known as Addisonian anemia. Mozart is, of course, a reference to Wolfgang Amadeus Mozart.

While the names of most streets in Avondale reflect citywide, and not local history, a number of the neighborhood’s shorter streets, particularly around Milwaukee and Kimball, relate directly to local landowners. These landowners include:


Most of this research comes from a single source, Streetwise Chicago: A History of Chicago Street Names by Don Hayner and Tom McNamee. But much remains to be learned about these Avondale-based landowners, who are remembered today by little else than their namesake street signs.