Though Avondale typically has been known as a working class neighborhood, the presence of Virgil M. Brand in the area a century ago marks a bold exception. Though Brand lived in a humble bachelor’s pad atop his (recently demolished) brewery on the west side of Elston Avenue in neighboring Logan Square, he turned a property on the east side of Elston in Avondale into an extravagant picnic grove- featuring a beer garden, bowling alley, hobby horses, dancing pavilion, shooting gallery, photo booths, merry-go-round, a ‘fruit column’ (likely a tribute to the famous fruit column of Stuttgart, Germany)1, and a restaurant tent. I haven’t the foggiest idea what a ‘Plattdeutsches Buern-Krog’ (shown in the northern map) might be, but his pockets were deep enough to build one that was almost 3,200 square feet!

Virgil Brand wasn’t entirely a self-made man- his father, Michael Brand, had been an original partner in the business that eventually became the Anheuser-Busch brewery. However, he worked as a bookkeeper at his father’s brewery, and by 1899, after his father’s death, he started a brewery of his own with two brothers and a cousin.

Interestingly, Brand’s enduring legacy seems more tied to his famous coin collection than anything else. At one time holding the title of President of the Chicago Numismatic Society and acquiring a collection reaching over 350,000 coins worth an estimated $2 million by the 1920s, he “entered each and every purchase in a journal, and his legacy included more than 50 volumes of original and photocopied data detailing the contents of his collection.” According to an article in the Numismatist, for Brand “to desire a coin was to own it if it could be purchased”- presumably thanks to his massive fortune as a beer baron.

The ultimate decline of Chicago brewing is typically attributed to Prohibition (1919-1933). However, Brand’s untimely death in 1926, reputedly resulting from food poisoning at a restaurant catering to the poor, may have accelerated the downfall of the Avondale paradise that once was the Brands picnic grove. In the 1920s (it’s unclear whether this began before or after Brand’s death), residents of Avondale petitioned the board of the new River Park District to purchase Brand’s site, and by 1927 it was formally acquired. Facilities at the time included basketball and tennis courts, a horseshoe pitching field, and an athletic field converted for ice skating in the winter. By 1934 the park was consolidated into the Chicago Park District.

Little evidence remains of Brand’s old picnic grove, and the original brick structure that served as a fieldhouse (presumably part of the old bowling alley) was demolished in the 1970s to make way for a new, larger fieldhouse which, like disco music, could only have been considered aesthetically pleasing during the 1970s. However, in the northeast corner of the park, three monstrous and ancient black poplar trees still stand, perhaps made strong by the beer-soaked grounds. 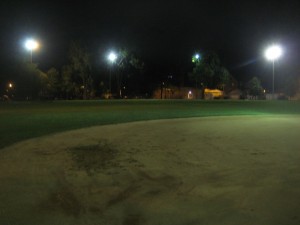 Brands Park is today home to a couple of baseball diamonds

1 The fruit column originated at Cannstatter Volksfest, which celebrated a successful harvest in 1817 following years of drought caused by the massive eruption of the Tambora Volcano in Indonesia in 1815.

[Following is a guest post by fellow Avondalite Elisa Addlesperger]

Located adjacent to the C&N.W. railroad, the village of Avondale was established as early as 1869.(1)  Even before the Chicago Fire, developers were counting on expansion beyond the city borders.  A real estate advertisement for a property located near the intersection of Milwaukee and Diversey boasted a “10 minutes’ walk to depot, commutation fare 6 1/4 cents.”(2)

The name “Avondale” is pleasant and rather bland, almost like that of a modern suburb.   When beginning my research, I presumed a developer was appealing to the then-fashionable craze for all things related to ancient Scotland.  However, according to an unpublished guide on Chicago street name origins, both the street and area were named for the town of Avondale, Pennsylvania by developer John Lewis Cochran. (3)  Cochran established several subdivisions on the north and northwest side of Chicago, often naming streets after towns in his native Pennsylvania. (4)  On September 6, 1869, the worst U.S. mining accident to date occurred at the Avondale Colliery in Luzerne County, Pennsylvania.   A wooden coal breaker flue caught on fire, trapping and suffocating 110 mine workers.  Obvious oversights (mostly for economy) by the owners, such as providing only one exit, and attaching furnace ventilation into the mine shaft, directly contributed to the disaster.(5)  The tragedy was extensively covered in Chicago newspapers, and Mr. Cochran might have chosen the name to commemorate the memory of those lost.

4. Gapers Block. “Roscoe Street, or Why So Many Chicago Streets Are Named for Towns in Pennsylvania.”  Alice Maggio
http://gapersblock.com/airbags/archives/roscoe_street_or_why_so_many_chicago_streets_are_named_for_towns_in_pennsylvania/